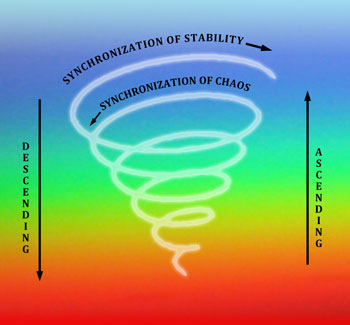 These intense times during the Ascension cycle requires that we undergo accelerated clearings of old and dense energies from our bodies and the planet. As we become less dense through embodying higher frequency, the physical matter state changes in so that liquid plasma light is able to be conducted through our aura (spirit-energy body).  As we are gradually able to conduct small amounts of plasmic light, we are capable to change the atomic structure of our body from carbon based density to the less dense compound of silicate. This occurs through the changing of the number of electrons that are bonded to our atomic and subatomic structure.

It is interesting to note the carbon atom has 6 electrons, 6 protons and 6 neutrons. This is the base atomic structure of our elemental-emotional body on the earth. Protons, electrons and neutrons build elements in a straight forward manner. For each additional proton, a new element is created. For each proton, an additional electron is attracted. The number of neutrons also increases but not necessarily one neutron per proton. When changes, such as ionization are made to the base 666 structure a new element can be potentially manifested. This is the alchemical shift described by the Aurora Guardians through the vivified potential brought through the Four Living Creatures returning to the earth during this phase and re-encrypting the elemental base of our planetary body. Our physical carbon based body is shifting to less density through alterations made in the anti-particle structure. This process has been defined by the Aurora Guardians  as the re-encryption of the elemental body. The carbon atom represented as our elemental body is mutating to accommodate the new silicate pattern for the elemental body on the earth. This means human bodies are mutating to evolve beyond the base 666 carbon atom and it is reconfiguring, therefore changing the lower three energy centers of our body quite radically.

Additionally, to remove the frequency fence and quarantine of the “666” fields, ( such as the crucifixion implants) we absorb plasma light which changes the number of electrons and frees us from the lower density of the carbon atomic structure. It is this process the Aurora Guardians are devoted to help humanity to embody higher frequency plasma light in order for this shift to occur at the most elemental level of the physical structure of matter. This is the chemistry behind the Aurora re-encryption of the physical elemental body which is the Guardian project to upgrade the base atomic structure via plasma waves and plasma ships that are interacting with the earth plane of matter.

This is required in order to access the higher reality fields that are now being exposed to the Earth as potential elevated timelines. These higher reality fields are carried here in a concentrated energetic structure referred to as the “Ascending Frequency Hubs”. These are anchored into this dimensional plane creating energetic portal windows in various demographic locations on the planet. These "ascending hubs" were specifically placed on energetic planetary vortices in a type of concentric circled geometric pattern to conduct tri-wave current, which is the precursor to conduct plasmic light. These hubs provide frequency to be stationed to stabilize the planet’s grid from interference while allowing accelerated frequency transmission to humans in an unprecedented format.

These energetic Ascending Frequency Hubs begin an entirely new level of Earth experience and human response. These Hubs are an array of extremely concentrated high vibrating energies that also allow access to life forms (i.e. Et's)  never before present to this reality. One purpose of these new Ascending Frequency Hubs is to energetically sustain the support of true Lightworkers (Indigos and various soul groups) on the Ascension mission to expedite their next evolution level within the spiral of elevated timelines.

Soul Groups are beginning to assemble and recognize each other to support the connection to the new Ascending Frequency Hubs and to further activate hidden cellular memory and remember their soul mission with the earth. Together these Blue Ray Souls create the Indigo Shield to support the planetary body to help her move the earth kingdoms into the Aurora time continuum for the GSF Ascension. There are also Platinum Indigo's that are here to recode the 12D string harmonics (crystalline fields webwork) into the planetary field and ley lines,  in order to recreate the Organic Christ Consciousness Grid, a group 144 harmonic base shield resonance.

The Frequency Hubs better facilitate the quality and variation of frequency required for cellular activation to occur to access this particular cellular history and information in the Indigo’s emotional/heart centers and its cognitive functioning within the brain neural net.  Many Indigo’s will be further activated to be trained in planetary stewardship for more visible roles in the world. Indigo's have come to help the planet undergo the Ascension process, and act as an energetic acupuncture point to re-code frequency and work with the planetary grids. This is the lightbody function built into the wiring of the soul blueprint, as when an Indigo or Star being becomes spiritually awakened, many are automatically conducting between the higher intelligence fields as frequency conduit for specific points in the planetary grids, whether they are directly aware of that fact or not.

In closing, rest assured that if one sincerely asks for guidance to know how to participate with one’s ascension process, especially if you follow the Law of One guidelines as a part of developing strong personal spiritual virtues and moral ethics, one’s path will be revealed very directly and rapidly.  Divine order and deferring to be a physical vessel of the Spirits of Christos in service to God’s divine plan, works within synchronicity and a “Need to Know” basis. We may not get every detail sorted out up front, as we cannot control the process through our ego’s will. However one must learn to consciously participate and have a heart filled desire to learn how to connect with themselves, their inner spirit, or they will experience suffering from disconnection. This is to gently nudge everyone to make the necessary changes required and to learn how to transform with our ascending planet moving into group consciousness.

Everyone can learn to create and contribute to the higher Ascending Frequency Hubs on the planet. Through learning the 12D shield, one is not only strengthening and protecting their personal aura, they are contributing to the planet consciously by participating directly with the raising of global frequency to unity consciousness.

At this time there is incredible gratitude and expanded support for us in the multidimensional realms. We thank you for being a part of these incredible times of the Earth’s Revolution to GSF Krystic Evolution!

"History does not long entrust the care of freedom to the weak or the timid". ~Dwight D. Eisenhower