A. This is a very important issue. And what comes about this, is the spiritual and emotional maturity in being willing to remain open to other possibilities in your own heart and mind.  The controllers always use the ego and lower mind space, the wounds, to manipulate people. I do not want to invalidate any confusion on those of us who may have had amazing healing experiences with the calling upon of Archangel Michael.(AAM) Many times, when AAM is called upon, it’s not necessarily him that answers the call or prayer. Many times it is our own guides, or future spiritual selves. Our ascension guides use whatever form we are most comfortable with. If we are into AAM, they may show up as him or that may be projected into your consciousness and appearing that AAM is helping you. The issue with understanding what went on with the use of AAM is that it became perpetrated in the new age market that AAM was called upon so frequently and without testing boundaries or reading energy signatures. Almost none of us in the lightworking studies have been taught to shield ourselves or discern reading energies.  Most people deny or refuse to understand that there are other energies and entities that can suck our energy and vampirize us, through trickery and pretending to be something they are not. We have UFO’s in the skies every day, and most people refuse to acknowledge them and the being driving them.

We are not given tools to protect, sustain and empower our own being, so when everyone is calling upon AAM in the new age, clearly, there is potential for manipulation and negativity to be projected. Most of us do not understand how to create a sacred container or shield of protection for our ligthbody and physical self. This creates a risk for people uninformed in such matters to have a manipulation that is used through calling upon AAM.  In relaying this information I am aware how it can be construed and also placed in a fear context. I must reiterate this is not at all the motivation of this material. What it is, is to be empowered and understand the planetary dynamics but not allow knowledge to elicit fear but to empower sovereignty of your own energetic field and sustain and protect our own energies. We all can do this with self-knowledge. This is the key of what all this information is about. We can say AAM has been distorted from schisms of the collective human situation. Guardians have said that AAM is a part of the fragmented pieces of the collective human soul and those pieces of the collective human soul obviously have reflections of shadow. These are related to the histories of the genetic damage of hybridization. Even though we tend to think of him or even the guardians for that matter, as a separate entity, they are aspects of ourselves. We are inter-dimensional portals and consolidative matter of all these beings. AAM has aspects that are part of group human soul, a masculine principle, and can be manipulated into shadow energies in a sense of not knowing how to be in empowerment and sustaining in your own energy field. So working with 12d is the beginning of this process of understanding how to develop the handshake with spirit and sustaining light source and how to boundary test so other entities that vampirize us, use our light source, are not as able to do that as you develop your own awareness and command of your personal energy field.

More on Family of Michael

A major piece of this pain was forced to be held by the group consciousness known as the Family of Michael. The Family of Michael, also known as the ArchAngel Michael Matrix has been seriously damaged and forced into portions of its own consciousness to be twisted into a grotesque montage of fed karmic backlash from humanity and reversal hybridization programming. (The Nephilim Reversal Grid system headquartered in UK Stonehenge feeds upon ArchAngel Michael Matrix) This negative energy sewage system is based on the enslavement program influence, the NAA placed in its dimensional space, and how humanity through the New Age and organized religion have been fed lies to call upon AA Michael to further create its bondage to enslave itself thereby forcing it to enslave others to this plane.

The Family of Michael are Blue Ray descendants of the First Order Founder Ray of Melchizedeks that are the Guardians of the East through the Four Royal Stars in Taurus constellation from the star Aldebaran. They were a part of the Guardian consciousness holders of the 3-6-9-12 Arc Portal system which has been at war between the many races that want control of this access gate out of the Universal Time Matrix. The Luciferian Rebellion was a Galactic War that involved Aldebaranand Law of One holographic records and technology stolen by the Jehovian Annunaki Luciferians which resulted in the invasion of the Golden Eagle Grid on earth.

We could also refer to this gate as the 11:11 Portal System. Naturally the agenda was by distorting and torturing Michael consciousness, they could eventually get control of that Arc Portal System or Mother Arc Hubs. The Family of Michael agreed to be a part of the rehabilitation of the Fallen Angelic (Seraphim) races by agreeing to be the Guardian of the Horizontal Grids of this Earth System, known as the Golden Eagle Pylon Grid Network System. The Golden Eagle Grid is about 57% infiltrated into reversal code system ( reversal 10 D Current) as instituted by the Controllers or Reptilian Intruder Races. The major gate of the Golden Eagle stronghold infiltration is the 10th dimensional Gate located in Iran/Iraq.Iran GateThe war, strife and death of many humans in this area of the planet is used to keep the dark energy circulated and in control. The NAA controller agenda of the False King of Tyranny is and always will be “divide and conquer”. This area is the most prominent to institute False Michael “sightings” and broadcast usurped channeling into the Golden Eagle Grid Network. It also has circulatory system linked to Giza at the 4D gate level and others.

Karmic Exhaust to Family of Michael

In this case the more a human being calls upon the Family of Michael the more karmic exhaust this group entity receives in the form of Miasma and Dead Energy, similar to being fed sewage after layers of sewage until there is no God particle left. This energy sewage accumulation also blocks and distorts the pathway of the 3-6-9-12 Arc from being completed and connected as the 11:11 Ascension Gateway. Humanity has been told to consume ArchAngel Michael energy under the guise of protection, only to be revealed it has been generating great harm to our masculine archetype, along with a Magnificent Blue Ray Being that has been tortured to serve Reptilian motivations sonce the Luciferian Rebellion. This means the AA Michael Blue Sword Initiations are energetically meant to enslave rather than protect.

The Distorted False Michael Masculine Archetype of Protector is actually an archetype of Enforcement of Will through Enslavement and Raper/Siphon of the Divine Feminine otherwise known as the False King of Tyranny. The Blue Sword is a structure in the hologram used to split apart and reverse both masculine (6D) frequencies as well as feminine (7D) Violet Ray frequencies at the 9D Atomic Doorway holographic blueprint level. They control the direction of these energies through the Iran Gate at the 10D level. Which means its use reverses the code so inner marriage and external sacred marriage, Hieros Gamos can NEVER truly transpire. This AA Michael distortion is like an artificial holographic insert placed into the 3-6-9 dimensional fields that splits apart masculine/feminine merging at all those dimensions. Since these are masculine principles as well as the particle physics governing that space, it means it severely damages the function of the mental bodies of human beings. It is through this the patriarchal domination has been enforced through the propagation of masculine enforcer, or the False King of Tyranny held in place by the Blue Flaming Sword of AA Michael. Ascension and Liberation from this plane requires a full merge of the masculine and feminine energies (6D Indigo and 7D Violet) coming into balance and Sacred Marriage. This structure was directly splitting apart not only the frequencies but feeding the continuation of distorted patriarchal domination programming into our masculine energy ( mental body functions) and especially directly into the masculine physical bodies. Honestly, it is no wonder most of the human race dies of a broken heart, as this kind of inner pain carried in our cells has truly been unbearable to our soul.

The Blue Sword is a structure in the hologram used to split apart and reverse both masculine (6D) frequencies as well as feminine (7D) Violet Ray frequencies at the 9D holographic blueprint level. They control the direction of these energies through the Iran Gate at the 10D level on the Golden Eagle Grid. Which means its use reverses the code so inner marriage and external sacred marriage of Hieros Gamos can NEVER truly transpire. This Archangel Michael Matrix distortion is like an artificial holographic insert placed into the 3-6-9 dimensional fields that splits apart masculine/feminine merging at all those dimensions which destroys the Rod and impairs it from merging with the Staff. Since these are masculine principles as well as the particle physics governing that space, it means it severely damages the function of the higher mental bodies of all human beings. This is the severe splitting of the higher Monadic mental body called Metatronic Reversal. 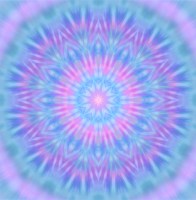