There have been a transference of a new level of coding that came through the Transharmonic portals and Andromedan station, it was almost like a football had been passed though the gateways and codes and intelligence on the trinitized form and Starseed genetic upgrades were passed through. At this time because of the level of mission upgrade to the timelines, and its future impact, there were council meetings. The comprehension of these meetings though attendance was that we came to a conclusion that a certain level of the ascension plan had been fulfilled from the crisis management standpoint. What was considered to be an extremely undesirable move into a potential timeline, was that was going to have to happen was a complete severing of phantom matrix spaces, and their feedlines into other reality systems. In a sense this is describing a parasitic host to our creation, it is very similar to understanding a tumor using the life force (blood) to nourish itself but starve the surrounding organs. These are phantom spaces.

The phantom matrix spaces and these levels of finite space exist in the anti-particle spectrum of that particle layer. Where I’m talking about that opening/vortex between the black holes, is leading into the anti-particle levels of the Universe and largely this is the space where many controllers exist. In between spaces and they know how to dimensional blend and move through time/space by ripping holes in the fabric of space, moving between anti particle levels and the controlled states of the astral planes. The reason why we don’t see the physicalization of these beings in their matter form, even though they can possess human bodies at times, is they do not have the gene pool to live on surface on earth. They work to manipulate the gene pool through controlling hybridization preferences. That is why it has maintained a level of existence where they utilize the planetary body and consciousness to feed off of that is within this holographic reality tank.

They control and move energy because they are advanced in this way but not advanced spiritually or emotionally and have no awareness of really what the Christ body can do and the amazing technology inside a human body. I see this kind of interaction with dark overlords who observe Starseeds and they are seeing what is going on in our ascending bodies. Some of us are incarnating certain templates they have absolutely no understanding or access in comprehending how the changes happened in the human body. They have all this advanced technology, they are manipulating the human race, and using mind control and scalar wave technologies and yet, there is this limitation. Finally, it’s like they are unable to understand the higher sensory perception that comes with the higher matrix intelligences of our oversoul and beyond. Now that we are starting to embody levels of galactic consciousness, this is way out of their embodiment realm and they are looking at it like, what is that? The technology is really us, we are the most amazing god technology you can ever imagine as a Christ. Everything in terms of stargate portal access is literally inside of us and it is absolutely amazing to be able to witness this within my practice, within myself. What this portends for the human race is that some of may be ahead but many are going to do some part of this process. It is a real level of optimism to see this next level of light body that we could never imagine and one of these things is the Transharmonic pillar which I’m noticing is that one of the levels of light body that we have, once we get to that level and now that the Transharmonic timeline is connected to this timeline, we have access to it. The Transharmonic Pillar becomes a part of our lightbody like an arc and a chute that is connected into our monadic consciousness body that allows almost like an elevator to move extremely fast between dimensions. It’s literally like you are transporting so quickly into another time/space you feel like you left your heart in the seat of your chair or something. Similarly to a diver that gets bends when he goes too deep under the water and comes up too fast and gets air bubbles in the blood and gets woozy. There’s a g force in this that is just pretty amazing to experience and this clearly is the beginning of understanding the ascension process is about embodying the stargate portal and embodying connections. So it really doesn't matter, locationally where you are on surface of the earth. Many of us will certainly be guided to certain places, certain demographics on earth. Not to ignore that inner message at all, but the consciousness technology in us as beings, once we get to the level of this ascension template activation is amazing and allows us to have access to Transharmonic Pillar, no matter where we are on planet. It’s all inside of us…(Source: QA, April 2008) 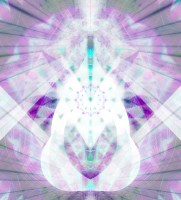