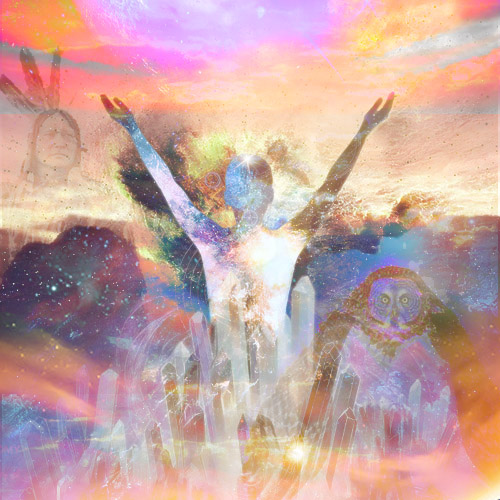 The horizontal grid and the planetary rod function (See Horizontal Triad Bodies) are controlled by the dark forces of the NAA and the Alpha Draconis/Orion Group through the "Golden Eagle Grid" reversed current alien architecture, which has its center controlled from Iraq-Iran and Giza Egypt. The 10th Gate in Iran-Iraq border is also the control center of the False Michael Matrix, of which Patriarchal Domination and its electron reversal consciousness is used to perpetrate against humans the negative alien "Mind Control" and its Bio-neurological Control technology. Archontic Deception Behavior such as Enemy patterning, war mongering, domination for territory, genetic elitism, hierarchical discrimination, killing and blood lust through the False King of Tyranny are a few of the mind control archetypes perpetrated on the primarily male 3D conscious mind to continue the war on enslaving humans worldwide. When the alien Predator Mind and its agenda is used for mind control on humanity, it becomes a belief system, then a value system or enforced via brainwashed violent religions, and the people that embody those archetypes become the perpetrator and enforcer for the NAA controller's agenda.

The NAA invaded our planet in this area to maintain its warring control and militarization over the most important Stargates in the Middle East in order to take control over the entire planet. This was accomplished as the infiltration into the Holographic Blueprint of the Planetary Logos architecture as the most effective way to create destruction of the human species through the continual creation of holocaust and genocidal wars through False Father God religions as a self enforcement method of planetary enslavement. The broadcast mind control from out of the Iran Gate is especially targeting males to be influenced towards organizing the total militarization agenda of the planet, through continual broadcast transmissions of divide and conquer through war and genocide, monitored by the Dragon Moth. The mind control transmission creates slaves which make those humans in the middle east targeted for mind control to enforce the alien agenda and warfare strategy on the ground, with minimal effort on the use of externalized alien resources. Thereby making "alien" invasion into the physical reality not necessary, as earth humans self enforce their own enslavement. The repeated cycles of historical conflict in Iran and Iraq, as well as its thoughtform infection spreading through the Middle East are a primary example of how this NAA mind control has manifested suffering, torture and killing of the human race.

Apparently Ezekiel, had another birth name and was the Master teacher to Pythagoras. As The Sacred Decad architecture is being revealed through the Ophiuchus transmission, the being known as Ezekiel has required assistance to help him be freed from enslavement bonds. His original teachings have been vastly distorted for nefarious purposes.

Guardian teams have been working in the Middle East, in the terrain of Iraq/Iran in the 10th Stargate, and at the Tomb of Ezekiel. The tomb of Ezekiel is a structure located today in southern Iraq, and believed to be the final resting place of Ezekiel. It has been a place of pilgrimage for both Muslims and Jews alike. Ezekiel’s higher Monadic Body has been trapped in the earth unable to evolve. We viewed a collective chaotic field of human body parts, elementals, creatures, and a monadic man, contorting within the Tetramorphic field. This entity has been in tremendous pain and suffering, from the variety of impaling, crucifixion and torture he has undergone in a continuing war zone.

• This collective field is a human Monadic man that became Consubstantial to elementals in the location of Iraq/Iran in the 10th Stargate. The bodies are mismatched and enmeshed like in a war zone. It is used by NAA forces.

• This body is a huge blackened gray field that feeds and is impaled on the Golden Eagle Grid network. This is a Fallen Elemental and false “tetramorphic” field structure where a man’s body was mingled into corrupted elementals/elements that feeds into the collective masculine principle on the earth.

• This alien machinery has something to do with military, killing and manifesting war zones in the males on the planet and transmitting mind control in the GEG fields that transmit to the planet.

• There is a network of Islamic Alien Machinery at the Ezekiel grave in the Middle East, and a very heavy infiltration of Terrorism, Jihad and Hatred attached as mind control. (ISIS portal)

• There are Hibiru Tribes related to Fallen Melchizedek lineages with this Ezekiel creature that was once a human male. Tribes of Manasseh, Joseph and Benjamin have been highlighted.

This is a piece of the station of identity of a human man known as Ezekiel, that has split off from this body and exists somewhere in the Monadic timelines. The Books of Ezekiel, contained gruesome accounts of the Gog and Magog war. This relates to the Armageddon Software heavily implanted in the majority of the population in the region.