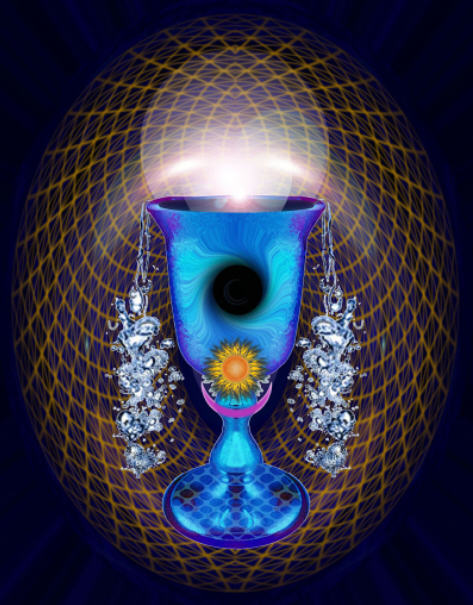 Tiamat was the Living Goddess of the 10th Gate, and the living intelligence gatekeeper to the Christ-Buddha-Avatar matrix. She was exploded into bits by the Moon Chain lineages and Marduk who used her essence to recreate lunar forces to replicate her essence in reversal formats. Marduk gave this intelligence to Enki/ Ea who decided he would invade Sumeria and play Annunaki God to the humans and gave his version of accounts that the Anu created the human beings and therefore they were the Gods of this planet. This was a way to create humans as slaves. Somehow Marduk did this to the Kumaras whom he was showing his anger, (who are the Chohan Ray Masters, otherwise known as the Ascended Masters of the New Age – El Morya, Kuthumi et al, there was some bad blood about Human-Orion Wars brought karmically to this planet with this complex situation). Without “her” we were unable to have our 10th Chakra and all its functions work in our bodies, as she was the link to communicate with our Avatar self. She is a part of the Triple Goddess Formation and apparently the Merging Shield is the Living Creature Matrix to remind me/us that we are to rebirth her essence again onto our planetary body, and then hence our own physical body. Because we went through the wall in time on the 28th, we are able to gain access to this incredibly ancient part of ourselves. The 10th Chakra has lines around our Left side and its main portal is a network from behind the left ear, to the crown and to the Soul Star directly above our crown, about 6 to 8 inches above our head. This is like a communication portal from our Avatar (triad) Christ consciousness intelligence, and without this communication hub in our Lightbody, we cannot sense communication at that frequency level. So it is like expressing that this is the decoder of language to “hear” or directly sense that communication inside our own body, directly. The destruction of Tiamat (like a heaven and earth principle living together in perfect harmony) is synonymous with the destruction of sacred marriage (union of opposites), the split in the wall in time, and the shift to patriarchal domination and/its electron distortion. The shift to patriarchy was inevitable and planned through the last cycle, however the levels of destruction nearly took creation to annihilation.

Tiamat is the dark goddess, wounded, enslaved and abused female archetype in the holographic architecture, which is used to distort women and female principle on this planet. Nibiru is the same, an architecture and archetype for patriarchal domination to distort males. These two planet bodies are like on a see-saw (an energetic elliptical trajectory that moves them in partnership) holding a balance between them except one body matrix, Nibiru, is here in our atmosphere, and the Tiamat exploded bits are congealed in a false phantom body being “used” as the dark goddess and female counterpart to the masculine Nibiru.

There are artificial wormholes and parts of the time and space fabric that are vulnerable and weak from alien artificial manipulation, and it’s a connector between here in 2012, the Nibiru planetary body matrix and the Tiamat exploded planet, of which its combined memories are kept to inflict pain in the human soul bodies in the next density (and here). The pain of Tiamat is part of the construct used as a phantom system to artificially inflict these painful memories and its residue upon the human race. They squirreled parts of her wounded body bits in 2D, and use her consciousness to move in and out of time portals. This has been brought to my attention as this construct has something to do with the NRG Grid feed line in Stonehenge, and is something that holds the Vesica Pisces in harness through this construct which reversal feeds and distorts our true sacred marriage of divine equals, as in the Krystal Star, Hieros Gamos Union. Nibiru, the Annunaki planet has used the female planet Tiamat, post explosion, as the “female balance” to power its artificial machinery which keeps its movement to and with this earth, in an artificial orbit.

This collision with Nibiru happened millenniums ago with a 5D planet that was between Jupiter and Mars referred to as the female principle Stellar body Tiamat. This collision was catastrophic and severed the consciousness units of Tiamat and her Moon consort (Apsu,then son Kingu) which were strewn into pieces of an asteroid belt. This asteroid belt changed the orbits of the inner planets and outer planets of our Solar System. The severed bodies and consciousness of the planet were absorbed into a Phantom Matrix and its physical remains plummeted into a descending orbit into the 3D density we now exist. It is a part of this planet that we now exist upon.

All of us on this planet have this trauma memory in our cellular body. We will experience this sensation in different ways depending on our developed consciousness and higher sensory perceptions. It is an incredible memory of destruction, cataclysm and annihilation of planetary life. It is the same memory the controllers seek to manipulate in the human race to recreate that terror and cataclysm on this planet today.

"Let us touch the dying, the poor, the lonely and the unwanted according to the graces we have received and let us not be ashamed or slow to do the humble work." ~Mother Teresa