Distillation of the Inner Spirit

Many of us on the ascension pathway are well versed in the various symptoms we undergo during the phases of kundalini activation and the strange sensations of the spiritual fire moving through the body and body parts.  Clearly our bodies, minds and spirits are under reconstruction and it feels surreal to inhabit a body that is continually undergoing remodeling and energetic reconstruction. Moving into another bookend of the bifurcation of the Ascension time cycle, our consciousness and body elevates into another higher frequency location in the time and space field to prepare for the future direction our consciousness is progressing. This is another phase of “ascension molting” as the internal heat pulse frequency waves that distill purity within the elemental body, we may sense a part of our old selves being disintegrated and then purified within the spiritual fire.

The Zodiac structural principles are both energetic and geometric which are being aligned to the Alchemical Laws of God hosted by the Aurora Ray System. When astrological alignments occur through major conjunctions between planetary and stellar bodies, forces of alchemy occur which alter frequency current and manifest new creations. This new cosmic alignment changes the stellar architecture of how the Sun transmits the influences of the Zodiac in the Ray System throughout our Solar System. These stages of transmitting alchemical forces to aid consciousness evolution are qualities of which have never been previously exposed to this planet. This is allowing the Alchemical Laws of consciousness evolution to be transmitted through the constellations of which are inherently a part of the organic processes of planetary biological ascension.

The current phase of these Galactic Laws are being focused under the constellation of Virgo. It is the sixth stage of the Magnum Opus, the alchemy of consciousness.

This is the continual process of purification of the internal energies which separate the unnecessary dross and is designed to remove the contaminants. The goal is to acquire a concentration of the wholly natural essential substance, which is how the pure energetic consciousness is distilled. This is the process of accessing and obtaining that pure essence (via the inner spirit), and distilling its spirit substance into our body and earth. This is a phase of refinement of our internal energies and spirit in relationship to our body.

As we undergo this stage of purification, our minds can feel displaced, disoriented, as our mental body becomes more fluid we lose compartmentalization of the ego’s way of processing linear information. We begin to experience the ability to grasp essence of ideas organized  in strings of frequency, rather than concentrate the hardened structure of the calcified negative ego thought-forms. This Virgo principle also relates deeply to the Mother Earth, the earth elemental, so many of the sensations are felt in our connection between the body and into the earth realms, the dirt, crust, rock, crystals. Consciousness purification is the alchemical process of which the carbon atom is exposed to tremendous heat and fire, and the intense pressure applied upon these body elements distill the purity of the diamond crystalline elementals within the body.

Undergoing these intense ascension symptoms due to these recent bio-upgrades, I hold awe for our human bodies. It feels I have a Roman Candle shooting pulsing light waves throughout my body, a familiar feeling I know as the “kundalini” or the spiritual force moving through the body. Every day this week, I have woken up with a new level of experience in the body itself. I am very uncomfortable with the female symptoms, where the lower abdomen of the hara complex feels like an adobe brick is sitting there in the pelvic floor as it bubbles away in fermenting gurgles. When doing transiting of earth elements and shifting miasma this is a common side effect. Also, this is the lower dantien and hara complex where our Monadic body and eventually the eternal Krystal seed body seats in the physical.

In the most intense stages of kundalini, the digestive and elimination organs work really hard to move the energy and toxins through,  so its best to eat very little. In my kundalini episodes over the years the energy usually stagnates around the middle organs, it feels like all of the digestive functions come to a standstill and everything is barely moving, including myself. This last stage comes after the conclusion of a guardian grid project to help transit ancient entities out of the earth body itself. When kundalini fire has taken over its on its own timing, there is no stopping it when it has intelligent purpose and a schedule. And now, many of the Starseed Christos people are on a trajectory with a very definitive schedule to rebuild the sophianic body for the earth. Kundalini is intelligent and has a path that it knows exactly where it is going! From the human body perspective undergoing kundalini or Kundaray infusions, everything gets really slow, it may feel like the body is 20,000 leagues under the sea, and we have just returned from the scuba diving the depths.  Certain realms are watery principle and one may wake up from sleep feeling the inner ears and head floating in the dimensional waters of the sound fields. In my experience with the phases of intense kundalini activation,  it is very challenging to move quickly, or even put clothes on with a waist band. This is what I call the “toga” state, one feels like Buddha – along with the all too familiar Buddha belly, one prefers to walk around in just a wrapped sheet!

The emphasis now in my experience is pretty much all the major internal organs and their relationship to the body essence is entirely whacked out while getting re-wired. Each organ seems to be taking a turn, the spleen was really twisting around a few days ago, now it’s the kidneys working shifts in the blood. I feel the organ present and it feels like its writhing around trying to squeeze out something. It is like the sensation of a football game happening inside my body and the organs keep passing the ball around. All the general  patterns of kundalini activation - the burning up at night vibrating off the bed, certain body parts feel all tingly sunburned, some of it quite sharp prickling in fingers and toes, biorhythm and sleep state is all over the place, neurological system and brain feel exhausted, visitors hanging out at night to observe what’s going on.  As we open the field and set the spiritual structure,  snaps, crackles, and pops emit from the spaces in the bedroom, and it is not rice krispies!

Currently as we have an emphasis of shifts occurring to the earth body, our physical body elemental, there is the kundalini stage of die off or what is also called apoptosis. Apoptosis is word of Greek origin, meaning "falling off or dropping off." Apoptosis is controlled programmed cell death which is directly related to the mitochondrial instruction set of the cell. Cell death plays a considerable role during physiological processes of multicellular organisms, particularly during metamorphosis from kundalini spiritual activation. The key player in switching into this die-off mode is the mitochondria of our cells.

In fact we must look to mitochondria (The Mother principle) as being the chief orchestrator of the entire kundalini alchemy process of spiritual ascension. Mitochondria play a central role in apoptosis (cell die off) by amplifying and mediating extrinsic cell die off pathways ( elimination channels) , and in the integration and propagation of death signals originating from inside the cell such as DNA damage, oxidative stress, starvation. Apoptosis is most often induced through the disruption of the mitochondrial inner transmembrane potential and through a sudden increase in the permeability of the inner mitochondrial membrane. This causes an influx of water by osmosis into the mitochondria with the eventual rupture of the outer mitochondrial membrane, resulting in the release of pro-apoptotic proteins from the mitochondrial intermembrane space into the cytoplasm of the cell. This toxic die off is commonly felt during the detoxifying stage and effects of kundalini activation and for some of us, may accompany spiritual crisis stages of the Dark Night of the Soul.

Blessings and we hope all of the Ascension family is doing well through these recent intense kundalini activation . Love, Lisa

(Source for apoptosis and thank you to biologyofkundalini.com) 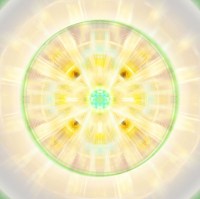