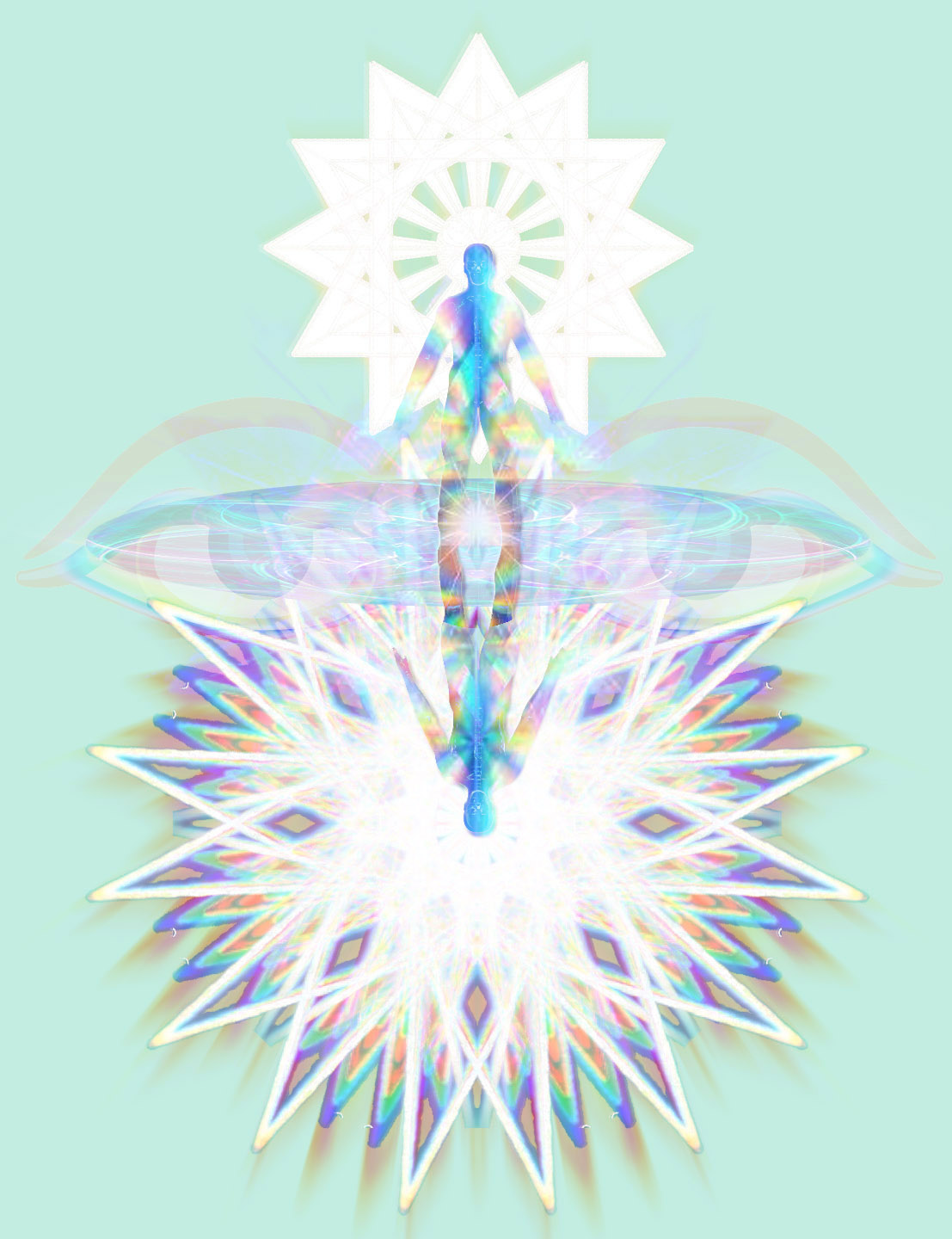 The macrocosmic structure of the Universal Tree of Life is replicated within the microcosmic structure of the personal tree of life, as the Musica Universalis, the Music of the Spheres which act as the harmonic structure that organizes the spherical vibration of multiple spectrums of frequency.[1][2] The Music of the Spheres incorporates the metaphysical principle that mathematical relationships express qualities or tones of energy which manifest in numbers, visual angles, shapes and sounds, that are all connected within a pattern of proportion.

Thus, we may become attuned to see these patterns of movement as energy in action in the multidimensional realities that are represented in our model of the Universal Time Matrix, as these massive sentient fields of co-creative Collective Consciousness that are journeying throughout time, space and dimension. Layers upon layers of Morphogenetic Fields exist at every level that a form has manifested as a Station of Identity in each dimensional plane, these dimensional spaces embrace and contain many other forms where all experiences of reality and manifestation take place. These fields are instruction sets that hold massive amounts of intelligent energy and intelligent consciousness communication that can be interacted with through heightened sensory awareness, such as Telepathy. In working with the planetary grid, Gridworkers may be asked to help deliver these energy imprints, hold blueprint prototypes, observe and review the architecture that these instruction sets hold in the morphogenetic field at the planetary layers, and these instruction sets may even extend to off planet worlds or into other star systems. For primarily Starseed people, this is another level of the intelligent consciousness communication that may be received in the process of aligning and embodying our unique divine spiritual mission on the planet during the Ascension Cycle. Reconnecting our spiritual links and vertical channels correctly with the trinity wave architecture is an intrinsic part of the process of building Triad Communication Stations for exchanging with and expanding the Krystal Star communication networks throughout the Planetary Grid Network.

The source code or Unity Field intelligence is a Krystal Star or Christos Consciousness hub that is accessed through the merging of manifested bodies that are holding trinity wave formats and are able to connect directly into the exchange made with the Eternal Source light of the Godhead. The three sound-wave-tone parts when merged into internal Energetic Balance become designed as one component that accesses directly into the feedback loop that is exchanging with the Eternal source supply, the Zero Point. This exchange with the Threefold Founder Flame Godhead is the trinity principle of Christos, an inner sustained and eternal source light.[3]

Morphogenetic Fields are comprised of templates of conscious light and sound which serve as the blueprints on which matter and conscious identity will then manifest. This occurs at a microcosmic and macrocosmic levels of the Core Manifestation Template and is a part of the mechanics of all creation.

All matter forms and forms of consciousness, including the layers that make up planetary bodies and human bodies, are manifested through these morphogenetic, form-holding imprints of the core manifestation template or the 12 Tree Grid. They exist as a quantity of crystalline energetic substance that is composed of specific patterns in arrangements of frequency. The morphogenetic fields are instruction sets, they direct the movement of energy in the Scalar Wave points to form in certain ways, so that we perceive the holographic reality within that frequency band that our consciousness body is actually stationed within. The instruction sets contain intelligent energy that relays that quality of information to our consciousness, in which we can perceive that information directly or translate that information through sensory ability. [4]

The purpose of knowing about the instruction sets, is in knowing that our higher consciousness, the inner light of Christos, can activate and begin to transmit trinity wave formats into the planet's morphogenetic field patterns, and this shifts the reality into trinitized formats, that further build the Triad Communication Stations.

Many of the Galactic and Planetary Gridworkers have been setting up vertical communication links that act as Hub Handshake fields to help the Guardian Races access the new communication links needed to become a dual communication exchange with the Krystal Star families on the earth. These are spinning vortexes moving into toroidal transformer fields with a neutral core (as an example, see the 12D Shield Hub) which is designed for multiple purposes, such as to run corrected proportions of the energy currents and higher frequencies that are being transmitted during the Ascension Cycle. The Hub Handshake is the way Christos Starseeds poke holes in the NET to reconnect spiritual links and begin to communicate with the Krystal Star and Diamond Sun Christos races. The corrected current of the 12D Ray is capable to reset and reprogram Reversal Networks such as the Anubian Black Heart systems in the Planetary Grid Networks. Also another purpose is to step down the Zero Point Field and cosmic Christ intelligence Blueprint into the larger Collective Consciousness fields in so they act as a buffer to stabilize and harmonize the earth surface from destructive cataclysms, disasters or running the Armageddon Software. Once we can build the Hub Handshake we can start to lay down the Trinity Wave and Krystal Star architecture for building and expanding the gridwork for the Triad Communication Station. This is one form of planetary architectural repair to help correct the reversal systems of Alien Machinery that are used to collect Loosh, as the spiritually Awakening and activated human Lightbody is capable to reconnect and repair the spiritual links within oneself, as well as within the planetary grid system. [5]

Transcript - For years the Guardian Host have been showing me optical lenses which refract the light source into the holographic projector of the consciousness blueprint fields. It was shown how intermediary lenses, also referred to as eyes, are used in Mind Control systems to manipulate the patterns of refracted light in the 3D reality in order to create distorted holograms. The Negative Aliens technology created many of these artificial intelligence “eyes” that operate as the optical lenses of the False Father gods, such as Yahweh. These alien networks run bi-wave and reversal current into the planetary body and planetary mind in order to siphon energy into their artificial systems. In 2010 the Krystal Star family with the 144,000 seal in their 3rd Eye began to witness the schematic of the Divine Mind of God blueprint imprinted upon the center of our brain. The actual living and eternal Divine Plan of God through the Holy Father's Laws is being projected as a geometric schematic which contains the instruction sets of the divine will blueprint as perceived through its "All Seeing Eye". Unfortunately, the All Seeing Eye symbol has been hijacked in the past through the many uses of its symbolism in black magic rituals carried out for satanic or luciferian purposes. Which can be observed as the symbolism used in black magic to gain control over the economic and financial system, as well as the entire global money supply.

The Eternal Eye of God instruction set has been placed in the field through our physical, embodied person, and our mission is to ensure that we hold this 144 cell schematic for the energetic balance of the planet. When the schematic is being released for transmission into the field, it is similar that the body is acting as a transformer for the frequency current, stepping down and stepping up the variation of frequencies as they are being run throughout one's internal circuitry. The Divine Will from the Mind of God Blueprint has been placed in the 33rd parallel north latitude coordinate for access all over the globe. The 33rd parallel north is a circle of latitude that is 33 degrees north of the Earth's equatorial plane. It crosses Africa, Asia, the Pacific Ocean, North America and the Atlantic Ocean.

This begins another stage of the process which planetary guardian gridworkers are able to access the geometries required to create diamond sun networks of trinitized forms, that support the building of Triad Communication Stations throughout the globe. This is required to change the bi-wave energy system to the tri-wave energy system, which in effect is moving from a closed energy system into an open source network.

The installation of Triad Communication Stations and Krystal Star networks are designed to replace Reversal Networks that have been collecting Loosh from the earth inhabitants, and to work with the Krystal Star organic technology to open spiritual links to communicate directly with Krystal Star and Aurora Guardians throughout the many timelines. This began as a focused Planetary Grid Network repair project to install Krystal Star hosting and communication networks in December 2012, during the change of planetary hosting. [6]

The Cosmic Trinity emanations have reconnected spiritual links between Universal Melchizedek, Andromedan-Aurora families, and the Sirian Christos Masters that made an opening access connected through the astral layers that can be entered through the Giza location. The portal access then moves through Sirius 6D - Arcturus 7D - Orion 8D (Galactic Core), into Andromeda 9D, and then finally out of this system entirely. This is the Meta-galactic layers aligned to the luminaries of the next Universe which are connected to our Krystal Star communication networks. These are the result of a succession of Andromedan Stellar Activations. This was purposed to rehabilitate and relocate the lost souls of Tara and reclaim and repair the soul fragments in 4D, the Astral Plane and to emancipate the collective consciousness lost in the astral illusions of the False Ascension Matrix. This opening portal was allowed access for Krystal Star Guardians from the Next Universe, the Seven Higher Heavens due to the creation of the Trinity Wave blueprints that build the Triad Communication Stations in the planetary grid network. [10]