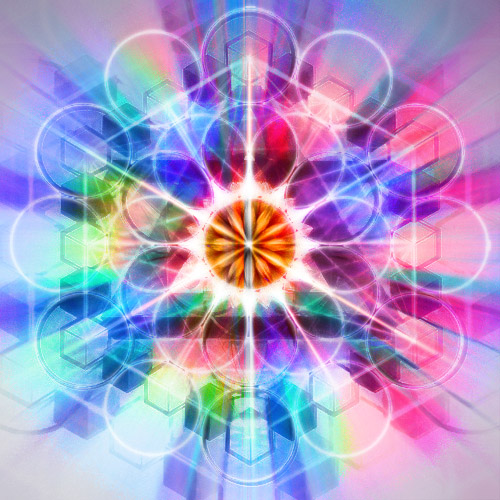 Currently, we are entering preparation for yet another new level of color frequency spectrums being projected as radiant light holograms into the planetary core manifestation architecture. A Krystal Kaleidoscope of plasmic light mirrored architecture is emerging into physical quantifications of color that project entirely new spirals of light, which include the Krystal frequency and time code.  These reflective bands of coded plasmic light are generated from the Krystal Kaleidoscope which forms the Krystal Spiral, and these spirals are woven into sequential circuits into certain powerful vortices and geographic areas of the planet. The Guardian host grid healing projects include building multiple access points in our earth that resonate with the reflectional symmetry that recode the planet grid when in contact with the Krystal code that emanates from the Krystal Spiral.

The Krystal Kaleidoscope is an architecture that operates similarly as when looking through a kaleidoscope. A Kaleidoscope operates on the principle of multiple reflections, where several mirrors are placed at an angle of degree to one another. Typically there are three rectangular mirrors set at 60° to each other so that they form an equilateral triangle. The 60° angle creates several duplicate images of the objects, five at 60°, and 2 at 90°. As the tube is rotated, the tumbling of the colored objects presents varying colors and configurations in a beautiful symmetrical pattern created by the reflections. The Krystal Spiral expands for every 45° or by two for every 90° of rotation made from the Krystal Kaleidoscope. This angle of rotation is derived from the height to width ratio of the original Diamond Sun body template, the living 12 Tree Grid. The number two access into the higher harmonic structure of doubling the Krystal code, is key to the anchoring of the Krystal Spiral into the earth grid. The Krystal Spiral forms a smooth exponential spiral that looks the same at every scale from the microcosmic levels to the macrocosmic levels. The Krystic architecture support an open living universe with full higher dimensional connections and direct connection through the center point into Source. They originate from the Krystal Code, which embodies original intention for creation as expressed through the 12 Tree Grid, the Krystal Spiral and its many trinity wave based structures.

The Krystal Kaleidoscope functions in the same way as the more recent architecture that has been placed on planet since the end of 2012, the Krystal Cathedral, Krystal Spires, and the City Four Square operate in the same mirrored reflection symmetry. If a being is capable to create a heart center willing to connect to the God Source within, and is capable to hold energetic integrity within itself, upon undergoing a reflection with the Krystal Kaleidoscope, this being has mirrored reflectional symmetry with the Krystal Spiral. The mirrored reflection symmetry present in the Krystal code adjusts and corrects the rotational axis formula to reflect the higher expression of the diamond sun body to activate into the core DNA instruction set of the being. This means if the "reflectional symmetry" exists through the developed heart center of that being, that part of the reflection will expand its symmetry pattern throughout its entire DNA, unwinding the Krystal code into any existing timelines in the holographic dimensions. This process is the reclamation of all Krystal Identities on earth to be returned for rehabilitation to the Aurora Host and Founder Dimensions in the Trans-time continuum. This does not mean necessarily, that we drop the body. What it means is we are connected to the Founder's Krystal Consciousness identities through the Krystal Spiral, and this Krystal code in our diamond sun body is the instruction set to load out earth humans to the Aurora time continuum or alternative evolution on other planets in the future. This is the GSF Ascension timeline and Consciousness Corridors that are hosted by Krystal Star.

If there is no mirrored symmetry present in the reflection of that being or its body to reflect Aurora colors, they will not perceive the Krystal Kaleidoscope design, Krystal Spiral, Source field of actual identity or any of its creations. This means it is essentially invisible to them because it simply does not exist in their lower dimensional perception of reality. Many beings in this domain are completely controlled by ego thoughtforms and disconnected from the Source. This state of being will eventually present the choice between eviction with the Vandal-Fallen races of NAA groups, annihilation of their species memory or genetic rehabilitation monitored under Krystal Star host on another globe chain.

The Aurora Rays are plasma wave patterns building layers of kaleidoscopic color coded shields which geometrically intersect with the Aurora time continuum through Krystal algorithm’s. The Aurora time continuum is accessed within multiple time vectors located in the Trans-time fields, which are able to be seen through the Aqua Ray of the Cosmic Mothers body.

Time Vectors are time codes which relate to fire codes or fire letters which are directly a part of activating planetary and human DNA. Through the activation of fire codes in DNA one shifts timelines, one can bypass timelines, one can eliminate destructive timelines and one may remember or view cellular memories in other timelines. When one is observing cellular memories from another timeline, it allows participation with the choices made that had impacted the past, present or future, through changing or clearing those memories that were made in those timelines. This is referred to as "rehabilitation of the timeline" which is made through the repair of genetic damage that was caused by the time vector code that holds the historical record of those accumulated cellular memories.

To be permeated with the original blueprint being holographically projected from the Krystal Kaleidoscope into Krystal spirals is to say that many of us are undergoing Krystal code and Krystal color correction to our Ray bodies. Also, the Ray attributes and aspects of color waves that have resulted from previous distortions in our manifested creations throughout timelines are in a process of color correction at the higher dimensions. The main seven Planetary Rays transmitted from the Galactic planes into Ursa Major, and into our Sun, are directed to the planetary body. The Galactic Logos is undergoing configurations that dissolve Metatronic energies into the Krystal Spiral at the 9th dimension, manifesting some recent aggression and desperate attacks from those Metatronic races inhabiting that level that are not willing to heal or transit.

Color correction and frequency saturation of the Krystal Spiral changes cellular memories and shifts timelines because it simultaneously shifts causal events that led into distortions or genetic damage made to our consciousness bodies. These are Ray attributes of our higher identity cellular memories which penetrate the subatomic layers of our energetic blueprint in this "now self" identity. Unstable forces and extreme polarities buried within our subatomic layers are surfacing now similar to the smelting process in metallurgy. Alchemical processes are applied sequentially to decompose the carbon slag and miasmatic debris layers to extract the purity of our true essence (gold) from the spiritual body. The tempering of our personal mettle extracts the pure elemental substances that forge the crystal diamond heart to birth within our golden body.

Of the seven metals known in antiquity only gold occurred regularly in native form in the natural environment. This is because our physical matter is made from the base chemical element of gold and so is our planet.

The current evolutionary theme is the process of spiritual integration of the reassembled parts the inner spirit has newly created in the energetic layers of the body consciousness. For many people this time has required polarity integration between the newly reassembled parts of these required patterns being synthesized into one's consciousness. Although many people on earth cannot sense the physical perception of these new color frequency spectrums, these Krystal Spirals include code that deeply penetrate the cellular bodies and stimulate the cells. The deep cellular change to our subatomic layers has polarizing impacts to our sense of identity, which physically manifest into our earthly life experiences. This is a great inner purge occurring, all the hidden demons, devils, egos, aliens and their foreign substances and machinery in previous timelines are being ramped up to the surface. Most people in the masses are very confused by what they are looking at, and if it threatens their belief system, they tend to use an ego defense mechanism such as repression, suppression or projection in order to cope. (Learn more about common ego defense mechanisms here)

This can stimulate the person's hidden distortions to explode outwardly, or it can stimulate the person's purity from their inner spirit to congeal and deeply anchor within their body. One may feel inner peace and comfort, or feel explosive and tumultuous, or ride the roller coaster of both experiences until energetic synthesis of the mind, body, and spirit is complete. This is a part of the Magnum Opus of Spiritual Alchemy.

"Nobody can bring you peace but yourself." ~Ralph Waldo Emerson 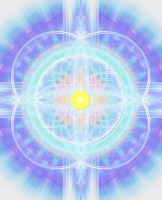