The visible spectrum is the portion of the electromagnetic spectrum that is visible to (can be detected by) the human eye. Electromagnetic radiation in this range of wavelengths is called visible light or simply light. A typical human eye will respond to wavelengths from about 390 to 700 nm.[1] In terms of frequency, this corresponds to a band in the vicinity of 430–790 THz. A light-adapted eye generally has its maximum sensitivity at around 555 nm (540 THz), in the green region of the optical spectrum (see: luminosity function). The spectrum does not, however, contain all the colors that the human eyes and brain can distinguish. Unsaturated colors such as pink, or purple variations such as magenta, are absent, for example, because they can be made only by a mix of multiple wavelengths. Colors containing only one wavelength are also called pure colors.

Visible light waves are the only electromagnetic waves we can see. We see these waves as the colors of the rainbow. Each color has a different wavelength. Red has the longest wavelength and violet has the shortest wavelength. When all the waves are seen together, they make white light.

The higher the spectrum of frequency that exists within an electromagnetic wave, the shorter the actual waveform becomes. We may better understand this through the charts of the visible light spectrum that show most of the color waves that humans can see with their 3D eyes.

The color wave spectrums at the base dimensions, such as the red (1D) and orange colors (2D), exist as a much longer electromagnetic wavelength than the higher frequencies that exist in the blue and indigo spectrum which have a shorter wavelength.

When white light shines through a prism, the white light is broken apart into the colors of the visible light spectrum. Water vapor in the atmosphere can also break apart wavelengths creating a rainbow.

The electromagnetic spectrum extends from below the low frequencies used for modern radio communication to gamma radiation at the short-wavelength (high-frequency) end, thereby covering wavelengths from thousands of kilometers down to a fraction of the size of an atom. The limit for long wavelengths is the size of the universe itself, while it is thought that the short wavelength limit is in the vicinity of the Planck length,[2] although in principle the spectrum is infinite and continuous.

The Sun emits its peak power in the visible region, although integrating the entire emission power spectrum through all wavelengths shows that the Sun emits slightly more infrared than visible light.[18] By definition, visible light is the part of the EM spectrum to which the human eye is the most sensitive. Visible light (and near-infrared light) is typically absorbed and emitted by electrons in molecules and atoms that move from one energy level to another. This action allows the chemical mechanisms that underly human vision and plant photosynthesis. The light which excites the human visual system is a very small portion of the electromagnetic spectrum. A rainbow shows the optical (visible) part of the electromagnetic spectrum; infrared (if you could see it) would be located just beyond the red side of the rainbow with ultraviolet appearing just beyond the violet end.

Electromagnetic radiation with a wavelength between 380 nm and 760 nm (400-790 terahertz) is detected by the human eye and perceived as visible light. Other wavelengths, especially near infrared (longer than 760 nm) and ultraviolet (shorter than 380 nm) are also sometimes referred to as light, especially when the visibility to humans is not relevant. (note: not relevant? all energy is relevant whether we can see it or not.) White light is a combination of lights of different wavelengths in the visible spectrum. Passing white light through a prism splits it up into the several colors of light observed in the visible spectrum between 400 nm and 780 nm.

If radiation having a frequency in the visible region of the EM spectrum reflects off an object, say, a bowl of fruit, and then strikes our eyes, this results in our visual perception of the scene. Our brain's visual system processes the multitude of reflected frequencies into different shades and hues, and through this insufficiently-understood psychophysical phenomenon, most people perceive a bowl of fruit.

At most wavelengths, however, the information carried by electromagnetic radiation is not directly detected by human senses. Natural sources produce EM radiation across the spectrum, and technology can also manipulate a broad range of wavelengths. Optical fiber transmits light that, although not necessarily in the visible part of the spectrum (it is usually infrared), can carry information. The modulation is similar to that used with radio waves. (Note: We are receiving huge amounts of information encoded in the energy wave form of the frequency spectrums that are not apart of the human visible light spectrum. This is how alien mind control programs are broadcast, how E.T.'s move in and out of our reality mostly unnoticed by the masses, and as well how other holographic projection phenomena is accomplished)

In astronomy, the optical window is the optical portion of the electromagnetic spectrum that passes through the atmosphere all the way to the ground. Most EM wavelengths are blocked by the atmosphere, so this is like a window that lets through only a narrow selection of what is out there, though the Sun is particularly active in the passed wavelengths. It is called "optical" because it comprises only the wavelengths we can see that are all in this range of visible light. The window runs from around 300 nanometers (ultraviolet-B) at the short end up into the range the eye can use, roughly 400-700 nm and continues up through the visual infrared to around 1100 nm, which is in the near-infrared range. There are also infrared and "radio windows" that transmit some infrared and radio waves. The radio window runs from about one centimeter to about eleven-meter waves.[1]

Note: Thus that which controls or manipulates the optical window also may control the atmospheric opacity, that which humanity is allowed to see in the lower atmosphere within the visible light spectrum. This is also referred to as the intermediary "lens"  or "eye" which has been placed to bend light and frequency within a certain parameter. The Guardians have referred to some of these intermediary "Eyes" as "The Eye of Yahweh", "Eye of Jehovah", "The Eye of Horus", "The Eye of Ra". These artificial lens are an alien architecture that have been placed to filter reality, bend light and are heavily intertwined with the control of world religions and salvationistic beliefs.

(Source: Wikipedia with notations made)

Conclusions: Mainstream science concurs the existence of many electromagnetic waves and related frequency phenomena that is not visible to the human eye. Is it not clear the next logical step is to explore those invisible spectrums of light and the information that is carried within it? Who is using that information and for what purpose? Why does the mainstream science of small minded people continually attack, persecute and destroy new discoveries? Are we willing to look at what we actually see when we explore these realms of "nonvisible frequency" when we sense them with higher sensory perception?

The Negative Alien (anti-human) Agenda is everywhere in plain sight if we just open our eyes and look at what is happening on the earth to enslave humanity. 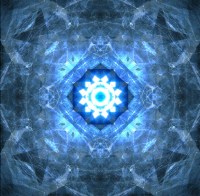