Energy is Consciousness and it either contracts or expands to maintain or increase its Rate of Frequency.

The process of how fast or slow energy contracts back towards its center point of source field is the Vibration rate.

The process of how fast or slow that same energy expands away from the center point of the source field is the Oscillation rate.

The combination of both the pattern of Vibration (contraction) and Oscillation (expansion) speed is what determines the frequency rate of all energy and things. As our personal, collective and planetary consciousness raises frequency, the matter world, including our physical bodies, also becomes less dense as our frequency increases.

Beyond the material realm and into a realm in which everything is energy is the Law of Vibration. A Natural Universal Law that states that ‘nothing rests; everything moves; every-thing vibrates which forms a rate of Frequency.’ The lower the vibration, the slower the vibration; the higher the vibration the faster the vibration. The difference between the manifestations of the physical, mental, emotional and spiritual result simply from different levels of vibrating energy, or frequencies. So, while the feelings of fear, grief and despair vibrate at a very low frequency, the feelings of love, joy and gratitude vibrate much quicker.

Vibration is a mechanical phenomenon whereby oscillations occur about an equilibrium or center point. The oscillations may be periodic such as the motion of a pendulum or random such as the movement of a tire on a gravel road. Vibration is responsible for the motion of a tuning fork, the reed in a woodwind instrument or harmonica, or mobile phones or the cone of a loudspeaker, and necessary for the correct functioning of the various devices. The study of sound and vibration are closely related. Sound, or "pressure waves", are generated by vibrating structures (e.g. vocal cords); these pressure waves can also induce the vibration of structures.

Consciousness energy (vibration) consists of and is interconnected providing a distinct vibratory pattern and is immediately transmitted and received, with no concept of space or time when released into the universe. Consciousness Vibration is not limited to time and space. Vast amount of qualities of vibrational frequency exist as an ever present consciousness layer that exists in the entire universe. Everything in our universe consists of layers of vibrational frequency. If the rate of that vibration falls below or rises above a certain intensity, it becomes immeasurable or invisible to the basic human senses. This means it is beyond the capacity of the five basic senses, such as frequency rates outside of the visible light spectrum. That doesn't mean that Vibration or Frequency doesn't exist because you cannot sense it.

All of these waves, from the lowest-frequency radio waves to the highest-frequency gamma rays, are fundamentally the same, and they are all called electromagnetic radiation. They all travel through a vacuum at the same speed (the speed of light), giving them wavelengths inversely proportional to their frequencies. 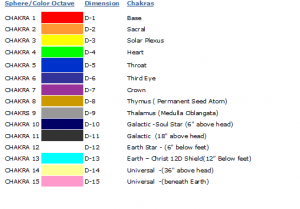 We are Pure Energy and Consciousness and with that there are very specific locations within our Lightbody that an individual’s choice of expressing emotion, thought, memory and experience all contribute to the manifestation of experience and form into physical matter. This will help us to become self-sovereign within our personal power and responsible manifestors in the world of form thus experiencing a much greater range of joy and fulfillment in the unlimited possibilities of co-creation.